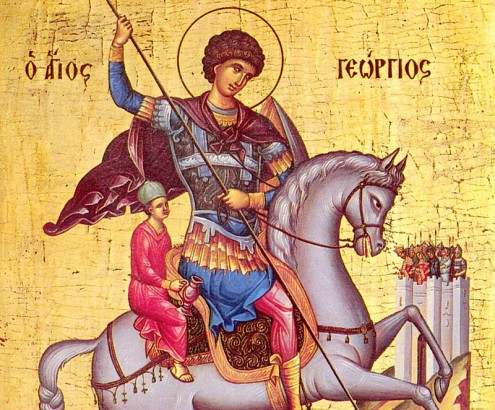 Saint George the Victorious is one of the most venerated saints in the Eastern Orthodox Church. Immortalized in the myth of Saint George and the Dragon, he is the patron of England, Bulgaria, Georgia, Greece, Ethiopia, Canada and other countries. He lived during the time of Emperor Diocletian and was a soldier in the Roman Empire.

In the icons St. George is always depicted on a horse, and at his feet lies the dragon slain by him. The Bulgarian Orthodox Church and the Orthodox churches in Georgia, Russia, Macedonia, Serbia, and Montenegro commemorate the Saint on May 6.

In Bulgaria May 6 is also a public holiday as it is the Day of the Bulgarian Army. Traditionally, on the day of the ecclesiastical celebration of Saint George the Victorious the flags of the Bulgarian Army have to be sanctified so that the Orthodox army that have dedicated their lives to the peace and security of the homeland can receive God’s mercy and support. The solemn ceremony takes place in front of Alexander Nevsky Cathedral Church, after which wreaths are laid in front of the monument to the Unknown Soldier.